What is a Ground Score & Why Drug Litter is Dangerous 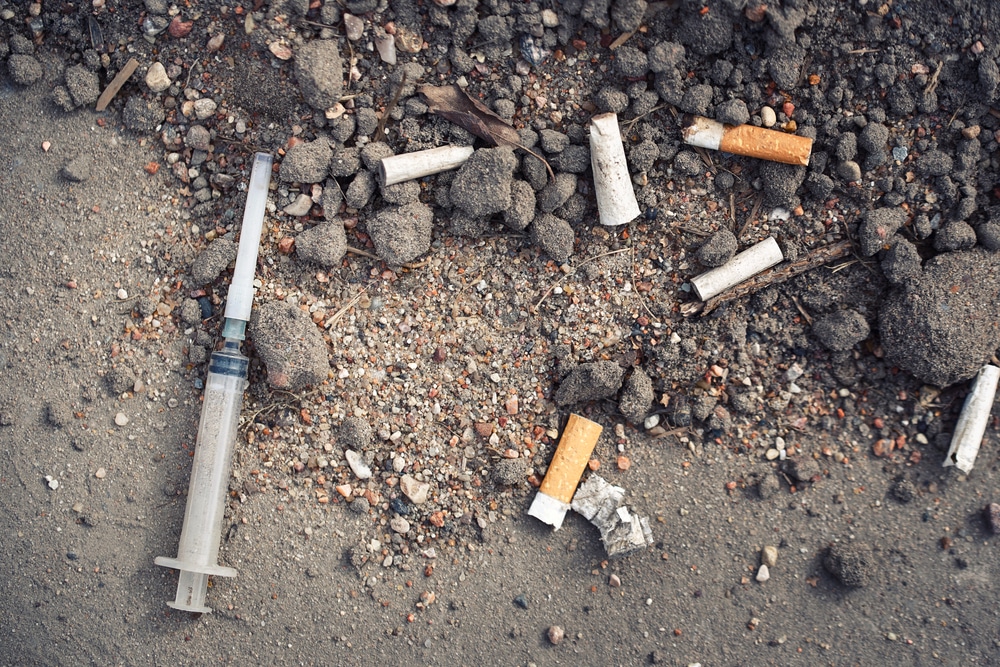 The concept of ground score is simple. Someone leaves behind or improperly disposes of drugs or paraphernalia. Then, whoever finds the drug or item claims it, and it becomes theirs. Lighters, syringes, needles, pre-and post-injection swabs, masks, patches, pipes, filters and even the drugs themselves are common examples of a ground score.

Ground score is a pretty common occurrence around the country. But this doesn't make it any less of a nuisance. When left on the ground, drug paraphernalia pose a risk not just to the environment but also to humans. We'll look at these risks later on in this article. But first, let's make sure we are on the same page.

What is a Ground Score?

A ground score is any desirable substance that's left on the ground. In this case, it can be any drug paraphernalia that drug users leave on the ground after use, such as:

People who abuse substances - including street drugs, alcohol, and prescription drugs - are at an increased risk for dependence, addiction, or worse, overdose deaths. Drug use also has side effects that make it hard for one to act responsibly. As a result, many users either leave drug litter around or dispose of it carelessly, exposing the environment and people to wide-ranging risks.

Why Drug Litter is Dangerous

Drug litter can cause serious health problems for those who come into contact with it. It can cause:

Adults, too, might swallow prescription pills and end up overdosing without knowing. Proper storage or disposal of drugs is the best way to avoid such predicaments.

Drug litter can be found anywhere, including the streets, neighborhoods, schools, and so on. However, you are likely to find drugs at music festivals, nightclubs, parties, and so on. That's because party-goers indulge in illegal drugs and throw the remains all over the place. But you can also find drugs at home when a friend or loved one disposes of their prescription medicines inappropriately.

How to avoid drug littering

Whether intentional or unintentional, improper disposal of drugs and paraphernalia is dangerous to humans and the environment. Littering happens due to:

But since ground score poses so much danger, it might help to avoid it altogether. There are safe disposal practices that you should follow whenever you want to discard drugs and any material associated with the drugs. One of the safest ways to dump unwanted drugs is to take them to a drug take-back program. It will help if you do this as soon as you realize that you no longer need the drugs. The Food and Drug Administration recommends the following was to avoid drug littering:

Effects of drug use and abuse

Drug litter can be a gateway to drug abuse. Synthetic opioids, mostly manufactured in South America, are highly addictive and often lead to substance use disorders - both long-term and  short-term. People, especially teenagers, might experiment with these drugs and end up using them more.

Drug use and misuse can cause side effects like increased heart rate and blood pressure, body temperature, paranoia, and hallucinations. Besides, drug dealers often cut drugs with a series of other substances, exposing one to the risk of overdose and overdose deaths.

Whether prescription or illegal drugs, drug litter is a dangerous problem for society and the environment. To keep your neighborhood clean and healthy, ensure you dispose of anything related to drugs responsibly.