What is Meth Mouth? 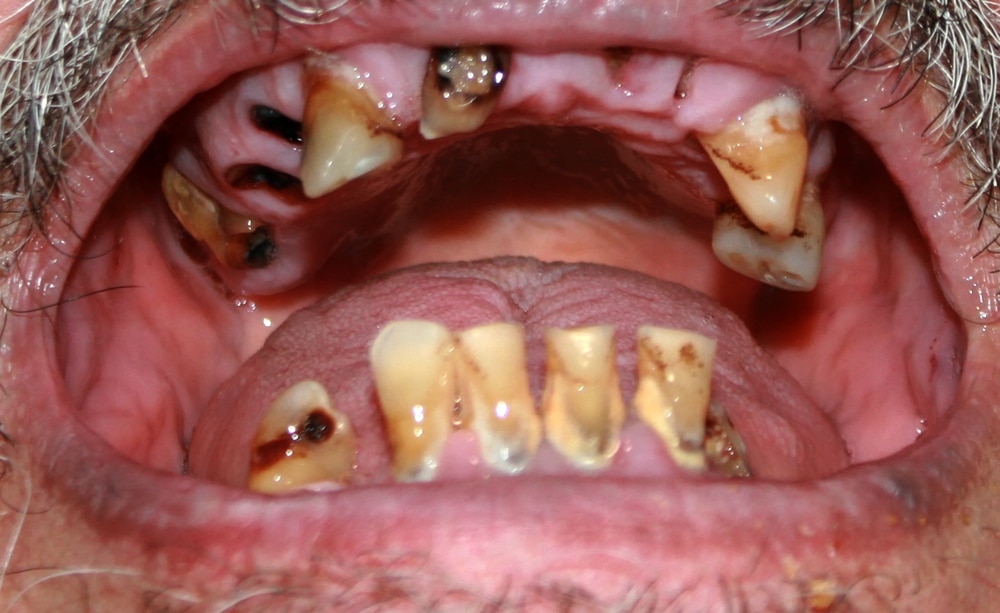 Meth users have a range of symptoms that are commonly seen in people with other substance abuse disorders. They experience high blood pressure, increased heart rate, as well as strong delusions and paranoia. Like other drug addicts, they may also suffer from memory loss, brain damage, stroke, mental health disorders, among other issues with long term use. However, meth users have a few signs that are specific to the drug, like meth mouth, which we will explore in this article.

Methamphetamine is one of the most commonly abused synthetic drugs in the world. In the US alone, 5% of the population, or 12.3 million people, have used meth at least once in their lifetime. Another 600,000 Americans use it every week. But you shouldn’t mistake its popularity for something good.

Meth is a dangerously addictive drug that can cause severe addiction and mental and physical health issues.

This shouldn’t come as a surprise because meth is made from strong industrial chemicals corrosive to the body. Again, it comes in a wide variety of forms – including tablets, powder, or crystals. This makes it easier for users to smoke, inject, sniff/snort, eat, or swallow depending on their environment and preferences.

How to identify meth use

Unlike other drugs such as cocaine and heroin, its cravings are way more intense. Meth users will go on a “run” where they keep on ingesting the drug for long periods until they overdose or run out of their supply. So, the signs will be evident within a few weeks of use.

Meth addiction is difficult to hide because it causes open skin sores and eats away at the teeth. The harshness of meth’s chemical makeup makes it corrosive to both soft and hard tissue. The acid in the drug eats away the user’s tooth enamel, causing rapid decay. It also corrodes the gum, causing it to bleed and pull away from the tooth. Dental issues associated with meth abuse are referred to as meth teeth or meth mouth.

Meth can be devastating to one’s dental health. According to a 2015 study published in the Journal of the American Dental Association, it’s use can cause extensive tooth decay, dry mouth, gum disease, and cracked teeth that affect the smile of users and their ability to chew. Meth mouth describes the visible effects of oral disease in a user due to rampant tooth decay and gum disease that happens with the drug use.

When someone ingests or smokes meth, they will rot their gums, teeth, and surrounding tissues. In most cases, they will experience painful dental abscesses and oral sores and even lose their teeth, and parts of their lips or mouth like tonsils, and tongue. Of the 571 meth users in the JADA’s 2015 study:

Why does meth affect the teeth?

One of the few ways meth affects the teeth is through hyposalivation (or dry mouth). Saliva is usually the first line of defense in fighting harmful bacteria in the mouth. The enzymes in saliva buffer acids and moisturize the mouth, keeping it in a homeostasis state. But meth use affects salivary glands, preventing the production of saliva, resulting in dry mouth.

Although studies and debates regarding meth use and tooth decay are still ongoing, one theory suggests that meth narrows blood vessels in salivary glands, inhibiting saliva flow. Other theories argue that drug abuse affects the parts of the brain that controls the salivary glands. Either way, meth, by itself, contains some level of acidity which directly affects the teeth.

Additionally, meth users drink lots of fizzy drinks to combat the effects of very dry mouth. But with little to no saliva in the mouth, that only creates an even better environment for bacteria to thrive.

To make matters worse, meth users grind or clench their teeth due to drug-induced nervousness, anxiety, and physical stimulation. Add that to already decaying or corroding enamel, as the situation gets out of hand.

And when all the focus is on acquiring and consuming the drug, methamphetamine users are less likely to practice good dental hygiene like flossing or brushing. Most of them won’t take care of their overall body, let alone oral health. And since the meth high lasts up to 12 hours, that’s a long enough time for acids to erode the teeth.

Can meth mouth be reversed?

People who struggle with meth addiction and its effects may benefit from addiction treatment. Treatment programs exist to help those who abuse meth to quit and lead normal healthy lives. Most of them offer holistic treatments to address the underlying problem along with the side effects of using, like meth mouth, or skin sores, etc. However, like most conditions, it’s always best to catch the addiction early, before things have gotten out of hand.

Meth mouth is incurable if the damage is widespread. This is why the importance of early treatment can never be overstated. Gum diseases and tooth decay, for instance, are highly treatable when caught early. But it might prove a challenge when the damage is severe. When untreated for prolonged periods, the patient may need extractions, dentures, and implants to reconstruct the damage.

The use of meth is linked to a range of severe health issues and irreversible mental and physical damage. Effects like bone and tooth loss, scarring, heart issues, organ failure, and permanent memory loss are common among meth users. Studies even show that long term use of meth can induce changes similar to dementia and Alzheimer’s. It’s therefore essential for the patients to go enroll to reputable treatment centers for medical detox and rehabilitation. Treatments can help fight the addiction, and resulting problems.